What an incredible opportunity to travel back to one of my 'other homes' in the world and participate in my second international Ironman race.  To be surrounded by so many wonderful people in my 'old backyard' it was a blast!  The city is a wonderful place to work and to play and it is one of my homes away from home 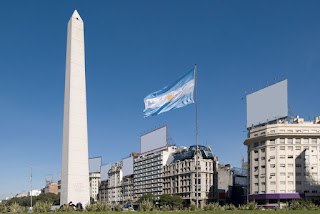 Fortunately, I was able to stay with the Longarela family who live right on the course!  Carlos Salvador, a business partner of mine, introduced me to his cousins, the Longarelas and we became fast friends.  Toto, Sofi, Juancho, Oscar, Milly and Lilly - all were absolutely incredible!  They helped with transportation, food, lodging - anything I needed.  They were the only reason I was able to do this. 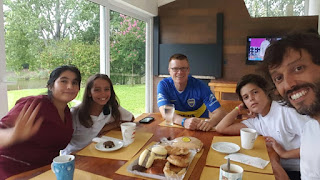 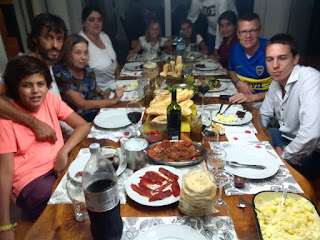 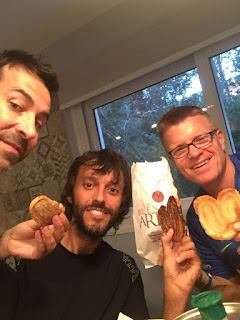 These pics come from the back of Oscar's house - we literally swam past him in the out and back swim course. 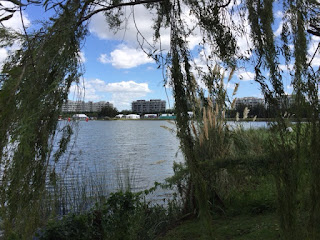 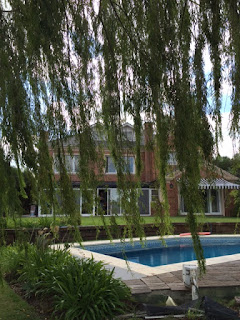 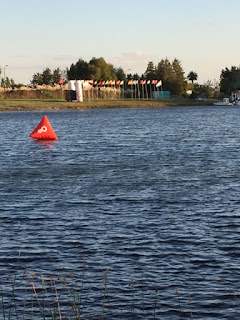 The swim was one of my better ones @ 45:43.  It was barely wetsuit legal but the day of the race we got the green light.  Transition of 5:41 was good also for me. 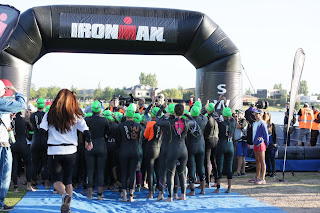 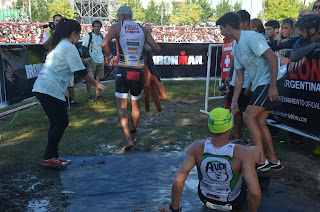 The bike was very flat two loops around Nordelta and the surrounding neighborhoods.  That was a good thing because the road conditions were typical Latin American - speed bumps, wooden bridges. Some gashes in the road.  It wasn't horrible but fortunately it wasn't very technical or there could have been a lot of accidents.  I loved the bike - it was the best part of the race for me.  Again, I did fairly well for myself with a 2:57:16 time.  Transition bike to run was not so good, 7:34. 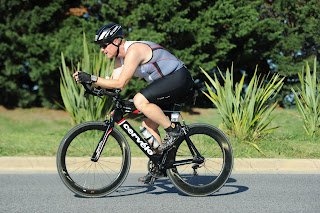 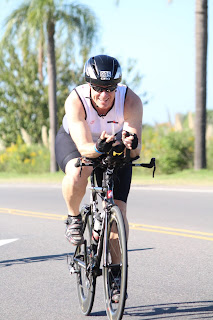 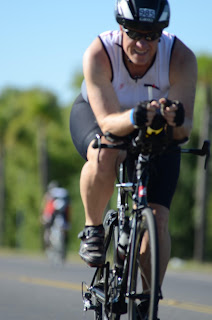 The run was when it all fell apart, especially the second lap.  First lap I did quite well but it was an open course, on concrete and it was quite warm and humid in the afternoon.  They did a great job with the nutrition, water, sponges, etc. but I just flat ran out of gas on the second lap and ended up walking a good part of of it.  2:30:03 was a reflection of running out of gas. 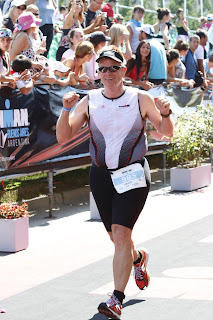 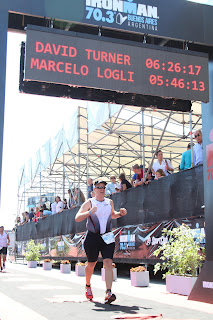 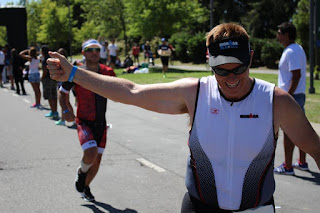 DT
Posted by Unknown at 9:54 AM No comments:

On the books!  Officially signed up for May 2, 2015 in St. George, UT.  Supposed to be very difficult but that shouldn't be a problem for me (haha).  Looking forward to it!

Well it is no secret that IM 70.3 Oceanside is one of my favorite races.  Last year, I achieved a personal best by breaking the 6 hour mark (for me that was a real milestone given how challenging the course is) and I couldn't wait to get back and enjoy the California sunshine, beaches and vibe again.

A couple of significant changes for this year's race awaited.  First, my sweet wife decided to accompany me this time.  What a treat to have here there to enjoy our time together and to have some fun.  Her brother and sister in law also decided to come down from L.A. to spend some time with us - we love to see family any time we can and it was such a treat to see them again.

The other treat was that so many other friends were in the race this year.  Jason Porter, Joel Betz, Lorie Tucker, Dan Beaver, Mary Knott, Karl Mueller and Bill Hagan all raced.  I even saw Darrell Holcomb (who I don't know very well) at the race.

I have to admit, the swim was a lot of fun.  I really enjoy swimming in the little cove that they have at the race.  An ocean swim is a bit of a treat, except for the salty water!  I always forget how horrible the water tastes and subsequent gagging that occurs.

This year, I was in the last and final wave of the race - 23rd wave!  There were 2500 participants - as large as an Ironman race.  Being in the last wave has more disadvantages than advantages.  The good news is it is a little warmer when you hit the bike - thats about it.  The bad news is you wait nearly an hour from the first wave…..

Last year, my goggles broke, I got a late start and I had my fastest swim ever at 38 minutes.  This year, no goggle malfunction but a pretty good swim - 41:48 is still my second fastest swim at that distance.

The bike ride is really a lot of fun and quite challenging.  The first 3rd is flat and fast - but you have to get out of the harbor and through some narrow spaces.  Being a fairly strong cyclist and starting in the final wave of the swim, this meant that I was passing A LOT of people on the bike.  I passed hundreds of people in the first third.

The second third has some monster hills.  I wasn't sure how my fitness would hold out but I hit the hills with resolve and a steady cadence.  No one passed me going up the hills.  Going down was another story as I just am not as comfortable flying down the curves and the hills - I brake a bit - another opportunity to improve I guess.  Still, all those guys that passed me going down, I would just pass going up the next hill.  Yo yo time… back and forth.

The final third is fairly flat but against the wind.  I smashed it.  Total bike time was 3:01:51.  Extremely good and 5 minutes better than last year.

One thing you know if you are in the last wave of the swim - anybody you pass during the race, you are beating - especially on the run.  Every body I passed was someone I was beating, at least on the second lap…  I got to see almost all my friends.  Dan the man, Joel, and Jason.  I knew I would need to make up some time to go under six hours again so I tried to really hoof it.

I saw Lorie Tucker on the final lap and she said, simply "Catch me!"  She was a half mile ahead of me and I was running out of gas so I knew that would be hard.  Still, it gave me some motivation to move forward.  I finished strong knowing it would be close.  I was tired but those wonderful fans and the ocean breeze really cuts the heat and makes this a great run.  I finished at 2:07:04 which was five minutes slower than last year. 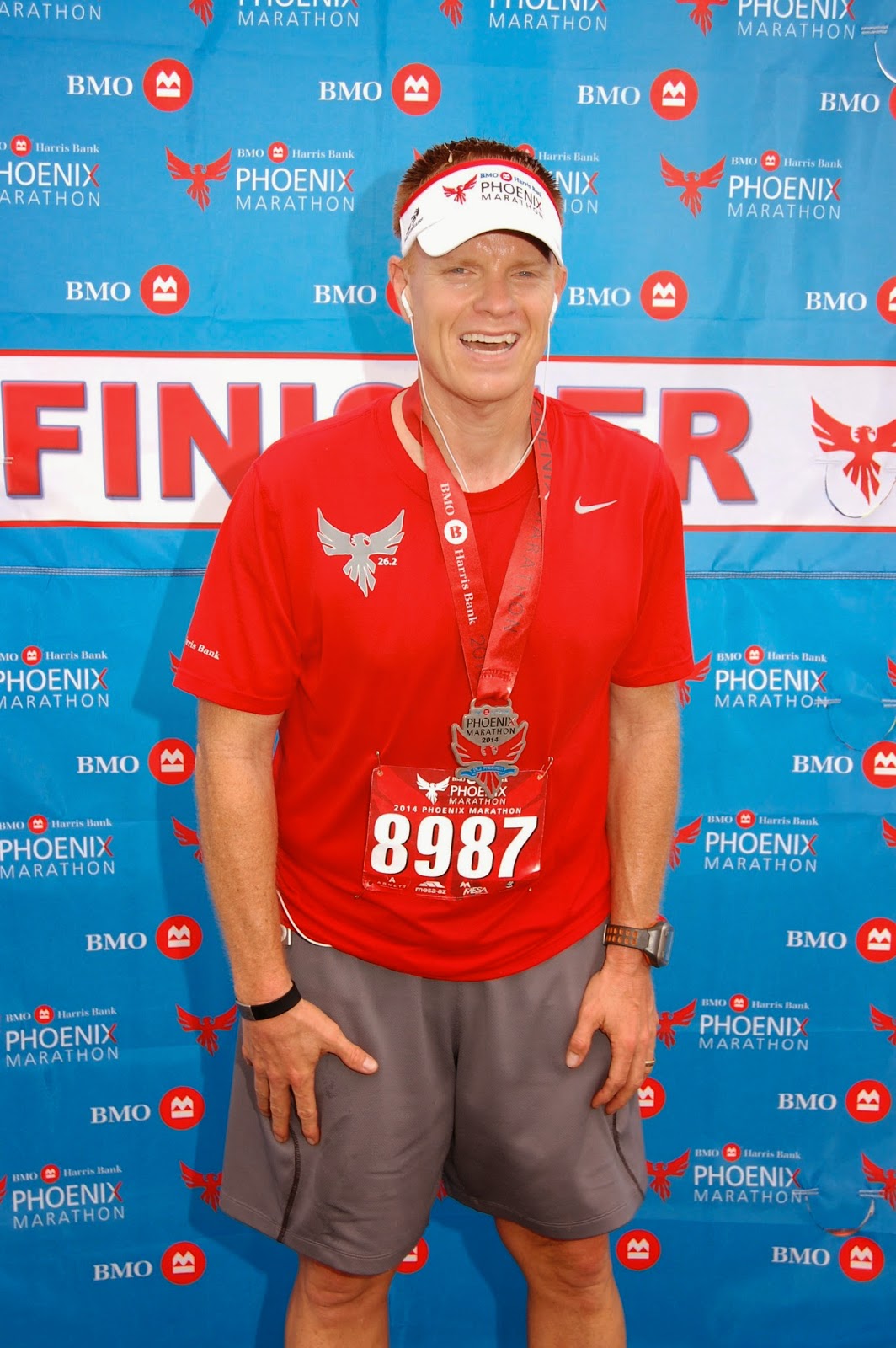 It has been a while and so much has gone on that I totally forgot to post my race report from the 2014 Phoenix Marathon.  I really love this race and I was looking forward to it.  The route is point to point, it passes all my childhood haunts and it is on a Saturday - all reasons to love it!  I signed up for this last year right after I did it for the first time....

What I didn't realize was how different this race would be from last year.  I have taken over responsibilities for Latin America for my company and I ended up scheduling a trip to Brazil/Argentina right before the race.  I literally got off the place noon the day prior to the race.  Coming off the fitness I had accumulated from IMAZ, I wasn't worried about being able to complete it but I had no idea how I would feel after 18 hours of flying, jet lag, time zone differences and climate change.

Prior to the race, we had about 70 days without rain in Phoenix.  Unfortunately, the day of the race was forecast to be a downpour and much colder than before.  Sure enough, as we gathered at the start near Usury Pass park, the wind was really blowing.  The heat lamps were getting blown out and the rain started to come down....  It was still dark and pretty cold as we walked to the start line...

Downhill for the first half of the race and I actually felt good.  In fact, the rain stopped and it got overcast but still a little windy.  All in all, it was the best of temperatures for the race.  I ended up running just a couple minutes slower than last year - given all the above, not bad at all!  I was happy at the end to complete my second full marathon at 4:28:52!

Decided not to do the full next year - too close to IMAZ and as good as I felt, it was really HARD!

DT
Posted by Unknown at 9:07 AM No comments: